When coaching a circuits class the other day, one of the participants got a bit heated with me over my coaching of the kettle bell swing. He didn’t like the fact I was getting everyone to go to above the head and thrust with the hips, and he said other trainers / coaches had never told him to before and therefore I was wrong.

When it comes to the kettle bell swing there are two methods, neither is wrong, but… what the chap in the class was used to performing is the Russian KB Swing, where you only bring the arms up to shoulder height. Yes the Russian swing is going to give you a workout for sure, however, I favour the American KB Swing – where you fling the kb back between the legs, thrust forward with the hips and drive the kettle bell straight above your head.

The American Kettle Bell Swing, the power comes from the hips thrust!

Why do I coach this method? If you’ve attended my classes or worked with me, you’ll know I love functional fitness and getting the full range of motion (ROM) out of people. So, why would you stop at shoulder height, your normal arm range doesn’t stop there. If you do stop there you’re not utilising your full ROM, and it’s a scientific fact that over time if you don’t use it you lose it. 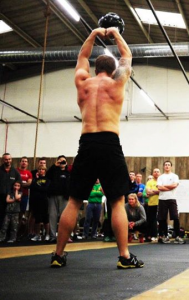 American KB Swing during a competition at Train Manchester

So the American KB Swing ensures you’re getting the most of your ROM and gives you a better workout response – my question, why wouldn’t you use this method?!

Photos via crossfit.com and Train Manchester.